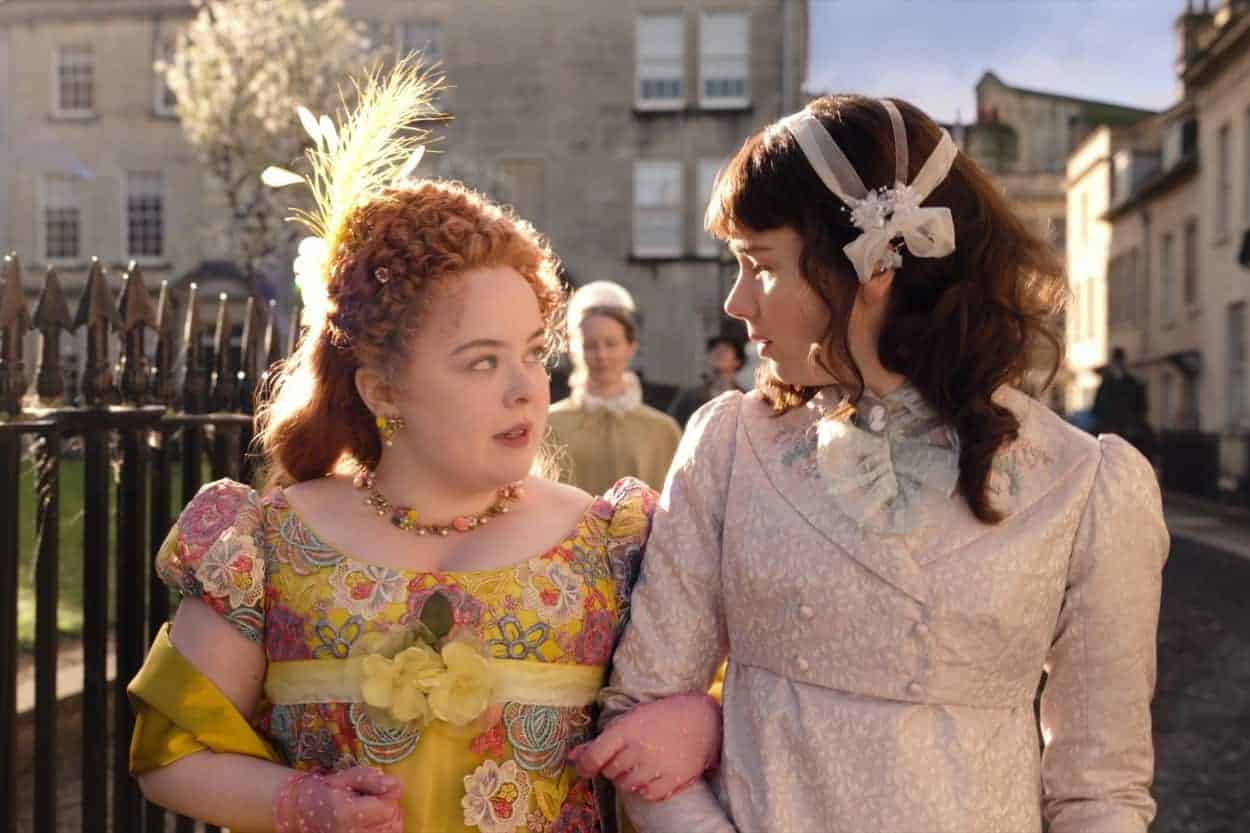 It’s time once again for the London social season to begin! Netflix’s buzzy romance series Bridgerton — based on the books by Julia Quinn — returns for its second season soon. Before diving back into the world of dancing, flirting, and the high society company of the ton, we present you with a quick recap of everything you need to remember from the first season!

As the eldest of eight siblings, all unmarried, Viscount Anthony Bridgerton (Jonathan Bailey) has a lot of responsibility on his shoulders. Not that he seems to want to do much about it.

At the start of the season, he seems vastly more interested in his affair with opera singer Siena Rosso (Sabrina Bartlett) than in escorting his sister Daphne (Phoebe Dynevor) to be presented to Queen Charlotte (Golda Rosheuvel). However, a stern reminder on his duty to the family, courtesy of his mother Dowager Viscountess Violet Bridgerton (Ruth Gemmel), prompts him to finally do the responsible thing, as much as he doesn’t want to. He ends the affair with Siena and turns his attention instead to finding a husband for Daphne.

Grumpy and annoyed at having his fun spoiled for the sake of family obligation, Anthony resolves to marry Daphne off quickly to the first suitable candidate he can find. Most of the single men of London’s ton do not meet with the eldest Bridgerton’s approval, and he sends them all packing before Daphne can decide whether or not she’s even interested in them.

He quickly settles on the bumbling Nigel Berbrooke (Jamie Beamish) as the ideal husband for his sister, telling her love will come in time. She is determined to marry for love, as her parents did, and infinitely prefers Simon, Duke of Hastings (Regé-Jean Page). But because Simon is an old school friend of Anthony’s, he at once declares him unsuitable.

Anthony changes his tune rapidly when Berbrooke is found out to be a less than ideal man, much less suitor, and when a short while later Daphne and Simon are found kissing in the gardens of a ball. That’s reason enough for him to demand that Simon marry his sister, which he eventually does — though not before Anthony nearly shoots his friend in a duel over Daphne’s honour.

With his responsibility to Daphne fulfilled, Anthony’s mind wanders back to Siena with increasing frequency. While his mother tries to fix him up with an appropriate society woman, Anthony’s attentions are fully taken by the charming soprano, and the two engage in clandestine meetings whenever and wherever possible.

On the night the London social season reaches its end, the relationship between Anthony and Siena also similarly concludes. He expresses a wish that she could accompany him to the grand ball Daphne and Simon are hosting, and tells her that his title would be enough to shield her from gossip. Siena rejects him, knowing this to be wildly untrue, and when he attempts to make it up to her the next day, he finds she’s already moved on to another.

The end of the season finds Anthony declaring to Daphne and Simon that he is resolved to find himself a wife who would make a suitable Viscountess, but stipulates that suitability for the role is all he is interested in. The last thing he wants is to fall in love.

This will, naturally, be tested in the second season, once a certain Miss Kate Sharma (Simone Ashley) arrives in town.

The second — and tallest! — Bridgerton brother Benedict (Luke Thompson) inhabits a strange space. He does not have the responsibilities of his elder brother Anthony, but neither is he so far away from inheriting the title of Viscount that he can afford to be as carefree as his younger brothers. Instead, Benedict turns inward and does what many young people do when they find themselves stuck: he picks up a hobby.

An interest in art and sketching leads him to make the acquaintance of Sir Henry Granville (Julian Ovenden). Granville invites Benedict to the art salons he hosts at his home, in order for Benedict to practice his skill. While the first session, a life drawing session, only surprises Benedict a little, it is subsequent visits to the Granville home that feel wilder and more scandalous in nature.

Rather than the elegant parties of the ton that Benedict is used to, the parties at Granville’s house are far more open and liberal in every sense of the word. There, he accidentally comes upon Granville being physically intimate with another man, before being otherwise engaged by Granville’s wife and by Genevieve Delacroix (Kathryn Drysdale), the modiste who designs dresses for all of high society’s most fashionable ladies.

Though Granville’s parties prove a little too much for Benedict, a frank conversation with his friend on the nature of love and how limiting the notion of suitability can lead Benedict to, as of the end of the season, carry on his affair with Genevieve.

The youngest Bridgerton brother old enough to be out in society, Colin (Luke Newton) is a sweet romantic with a heart of gold. He is easy-going and well-liked, particularly by Penelope Featherington (Nicola Coughlan), best friend of his sister Eloise (Claudia Jesse). It’s easy to see why Penelope likes him so much. What’s not to love about the dashing, popular man who swoops in when you’re being bullied by your peers and asks you to dance?

At the start of the social season, though, Colin has eyes for only one person: Marina Thompson (Ruby Barker), a distant cousin of the Featherington family staying with them for the social season.

Marina, however, has troubles of her own. Though she was sent to London by her father to find a suitable husband, she discovers soon after arriving that the love affair she had back home has resulted in pregnancy, and that her lover Sir George Crane is off in Spain fighting in the war.

When Colin shows increased interest in her, it seems Marina’s problems are solved. She reasons to an increasingly distraught Penelope that Colin would be a good husband and father to her child. Everything falls into place shortly after, with Colin proposing to her on the day of Daphne and Simon’s wedding.

Things seem to be proceeding perfectly for Colin and Marina, until Lady Whisteldown’s scandal sheet reveals the real reason Marina is so keen for them to marry quickly. Hurt by the deception, Colin breaks things off with Marina, but not before telling her that if she had been upfront he would have been only too happy to marry her.

Heartbroken and jaded, at the end of the season he embarks on a grand tour of Europe, needing to leave England behind for a bit.

The Fetheringtons: Never a Dull Moment

If the Bridgertons found it difficult to find a husband for their lone daughter out in society, then the Featherington family has four times the struggle. Lady Featherington (Polly Walker) is responsible for not only shepherding her three daughters Prudence (Bessie Carter), Philippa (Harriet Cains), and Penelope through the season, but Miss Marina Thompson as well. Quite the load for a Matchmaking Mama, especially when everyone seems more interested in the visiting cousin than in her own three girls.

Complicating matters is her husband Lord Featherington (Ben Miller). Beyond insisting that Marina join them for the social season, he appears totally disinterested in the process of marrying his daughters off. His reasoning becomes clear later, after he frightens away one of Philippa’s suitors and Lady Featherington discovers he has gambled away his daughter’s dowries.

Though they seem to gain a temporary reprieve when Lord Featherington fixes a boxing match and comes away a big winner, the whole thing falls to pieces when he is later found dead, and Lady Featherington receives word that the person set to inherit the Featherinton estate is en route.

Things do not go particularly well for the young ladies of the household either. After her engagement to Colin falls apart, Marina receives a visitor in the form of Sir Philip Crane, the younger brother of her lover George. He informs her that while George had intended to return home and marry her, he was killed in the fighting overseas. Philip offers to marry Marina in his brother’s place and to do right by her and her child. Though she initially rejects him, believing herself to no longer be pregnant, when she realizes that isn’t the case she, at last, accepts the offer.

Meanwhile, Penelope is still dealing with her one-sided feelings for Colin. Feelings that led her to out Marina’s secret in Lady Whistledown’s column — of which she is the secret author. Though the season ends with no one the wiser about Penelope’s double life, her best friend Eloise spent the bulk of the season investigating the mysterious writer’s identity, an investigation that is unlikely to cease in the new season.

What About Daphne and Simon?

With so many plot threads dangling heading into the second season, one particular narrative viewers won’t have to worry about too much is that of Daphne and Simon.

Though their romance was the backbone on which the first season was built, in the grand tradition of interconnected romance novels, the characters will be taking a backseat this season. While the teaser trailer and promotional images for the second season show Dynevor reprising her role as the eldest Bridgerton sister, it was announced some time ago that Page would not be returning to the series, though Simon will presumably not go unmentioned.

The second season of Bridgerton premieres on Netflix on March 25, 2022.