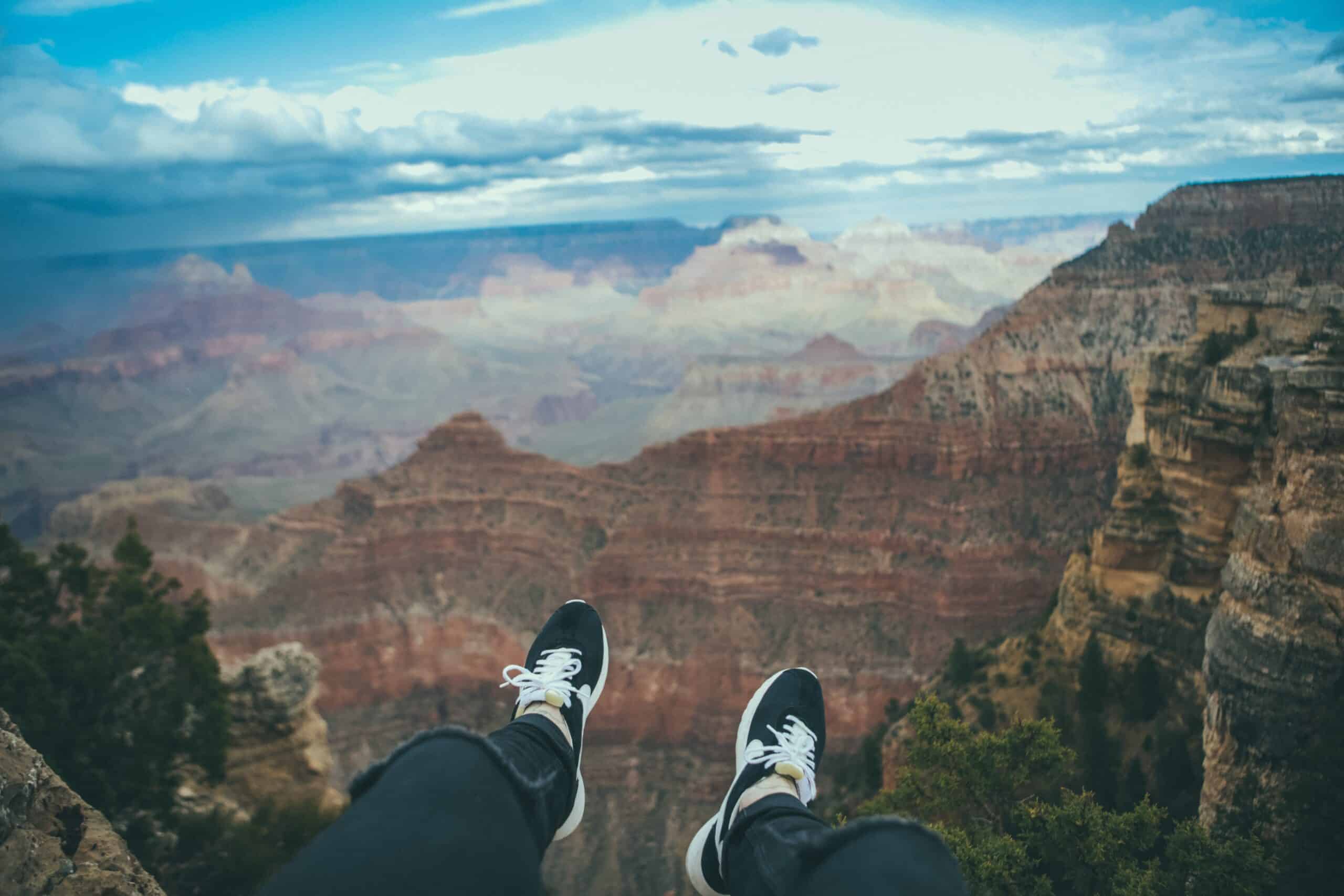 Located in Arizona, the Grand Canyon National Park is one of the most famous landmarks in the United States. Almost 6 million people visit a year, making it the second most visited National Park in America behind The Great Smoky Mountains. Whether people take a road trip from Las Vegas or stay local millions of visitors come from around the globe to see this 6 million-year-old beauty the size of Rhode Island.

28 Stunning Photos of the Grand Canyon

It’s truly an impressive sight and seeing these stunning photos, you might want to see it in person. Until you feel comfortable traveling, take our virtual tour of the Grand Canyon and, when you’re done, start saving up money for this ultimate bucket list vacation.

1. The Grand Canyon can be appreciated from multiple vantage points

Unlike some well-known landmarks, the Grand Canyon doesn’t have a single observatory that everyone has to cram into to get the one good view that’s available. It has multiple vantage points all over, such as Desert View Point, shown here.

Wildfires can be tragic and dangerous, but also can provide some really amazing photo opportunities, especially if you’re in an already stunning place. That’s what happened in this 2014 photo from Cape Royal, in which smoke from wildfires caused the extraordinary colors in the sky and the orange glow on the sandstone.

4. There’s more to do than just look at it

The views up from the banks of the Colorado River are stunning, but you can do more than just catch the view. Tourists come from all over the world to white water raft, hike and camp.

5. No CGI was used in the making of this photo

Some of the views that you take in at the Grand Canyon look like they can’t possibly be real, and that armies of computer animators must be responsible for them. Nope, only the Colorado River and millions of years (and some good photography skills) were used to create this photo.

6. Get up close and personal

Much has been said about the panoramic views available from the Grand Canyon’s many elevated vantage points, but you can go into it too. When you do, you’ll see that the views are just one part of the story. There are smaller but no less enchanting natural wonders throughout the entire park, such as Havasu Falls.

7. Walk on the wild side

People who enjoy hiking will find plenty of it to enjoy at the Grand Canyon National Park. The hikers pictured here are looking at the Colorado River from the Park’s South Rim.

There are many great hiking trails, but the Bright Angel Trail is a cut above. It’s classified as a “corridor trail,” which means that it’s maintained by park rangers, so it’s not strictly unspoiled, but with views like these, it hardly matters. Just please take your trash out with you, thank you.

Hiking is good exercise and a great way to take in the Grand Canyon’s many dramatic views. However, it can be strenuous and is not necessarily an “anybody can do it” pursuit. So if you decide to hike in the Grand Canyon, make sure you’re in good health and bring the right equipment, such as the hiking poles used here.

Fans of The Brady Bunch will be delighted to know that riding mules through the Grand Canyon is not something that was just invented for the show. You can pretend to be Mike, Carol, or Alice the maid and get on a mule yourself and ride through this historic attraction. Mules are big, so if you have trouble climbing yours, you may need to use a ladder, as Florence Henderson did.

The Grand Canyon has an unspoiled tranquility that invites the 21st century individual to abandon civilization and retreat to nature. Of course, that’s not for everybody, so if you like spending ridiculous amounts of money, consider taking a helicopter ride over it instead.

Sunrise over the Grand Canyon is spectacular. That’s it. That’s all there is to say.

13. Is Horseshoe Bend a part of the Grand Canyon?

The answer, technically speaking, is “it’s complicated.” It’s considered part of the Glen Canyon National Recreation Area, but the Colorado River flows through it and into the Grand Canyon. As the folks over at MaxTour.com put it, “Educated Answer: Defining the boundaries of the Grand Canyon and Glen Canyon is tricky business!”

So while it may be more accurate to say that Horseshoe Bend is “Grand Canyon-adjacent,” it’s a unique attraction that Grand Canyon visitors can fit in with just a small detour when traveling from rim to rim.

It’s worth visiting in the winter, and the sunsets are once-in-a-lifetime sights. If you happen to be visiting the Grand Canyon at the right time of year and can fit it into your schedule, make a point of going to see it.

In our everyday lives, the morning is a time to hit the snooze button (repeatedly) and chug coffee while cursing one’s workaday fate. In the Grand Canyon, you won’t mind getting up early, even if it’s only to see what kind of patterns the sunrise is giving to onlookers today.

The views from the Southern Rim of the Grand Canyon are sweeping and the colors change throughout the day as the sun and clouds work their magic on the landscape below.

18. Actually, every view is a stunner

If there’s a bad spot to take pictures from at the Grand Canyon, we don’t know about it. This photo was taken from Hopi Point, and if it doesn’t make you want to find out how much a ticket is to the closest airport, we can’t help you.

With a history going back millions of years, there’s no way human beings weren’t going to try and put their own stamp on the Grand Canyon by building a few structures. This includes the Indian Desert View Watchtower on the South Rim of Grand Canyon, which overlooks the Colorado River.

20. Beauty abounds in all kinds of weather, like fog …

Generally, fog is believed to ruin vacations, not enhance them. At the Grand Canyon, it’s just another weather condition that creates great photos. Here, the sun rises through the fog in the Grand Canyon’s South Rim.

The Grand Canyon does get snowy, and when it does, it enhances the scenery and makes it even more striking. This pine tree at the top of the South Rim is wreathed in snow and overlooks the Grand Canyon at sunset.

22. There are beautiful accommodations as well

23. Be sure you check out the Skywalk

The Skywalk is another part of the park that’s for tourists who are more interested in getting cool photos than in conquering its more daunting areas. It pokes all the way out over what could be described as a “chasm,” so anyone who suffers from dizziness, vertigo, or just a rational fear of heights might want to stay away from this one.

24. It’s all about perspective

The Grand Canyon is so enormous that sometimes it’s hard to get a fix on its size without anything to give it scale. This photo of the sun setting over the Grand Canyon features some hikers on the cliff to the left, and they have been rendered so tiny by the rest of the photo that it’s easy to miss them entirely.

25. Speaking of the North Rim…

The North Rim of the Grand Canyon has just as much going for it as the South Rim. People who go there and visit its Toroweap Overlook will see some sights that are as exquisite as anything in its southern counterpart.

If you’re lucky, and you’re standing in the right place at the right time — like right after this rain storm — you might just get a view like this one when you visit.

27. Back to those sunsets, though

Ask any professional photographer and they’ll tell you that if you want to capture magical images, you should do it at “golden hour,” which is defined as one hour after sunrise or before sunset. This photo, which was taken at golden hour, demonstrates why it’s so sought-after by so many people with cameras.

28. It’s enough to make you want to pack it all in

The sunsets at the Grand Canyon aren’t. just gorgeous, if you see enough of them, you may also begin to see the appeal in selling all of your possessions, dropping out of society, and taking up full-time residence at Moran Point, pictured here. The National Park Service is unlikely to let you move in, but it’s an understandable impulse.