13 of the Best Things to Do in Amsterdam, The Netherlands 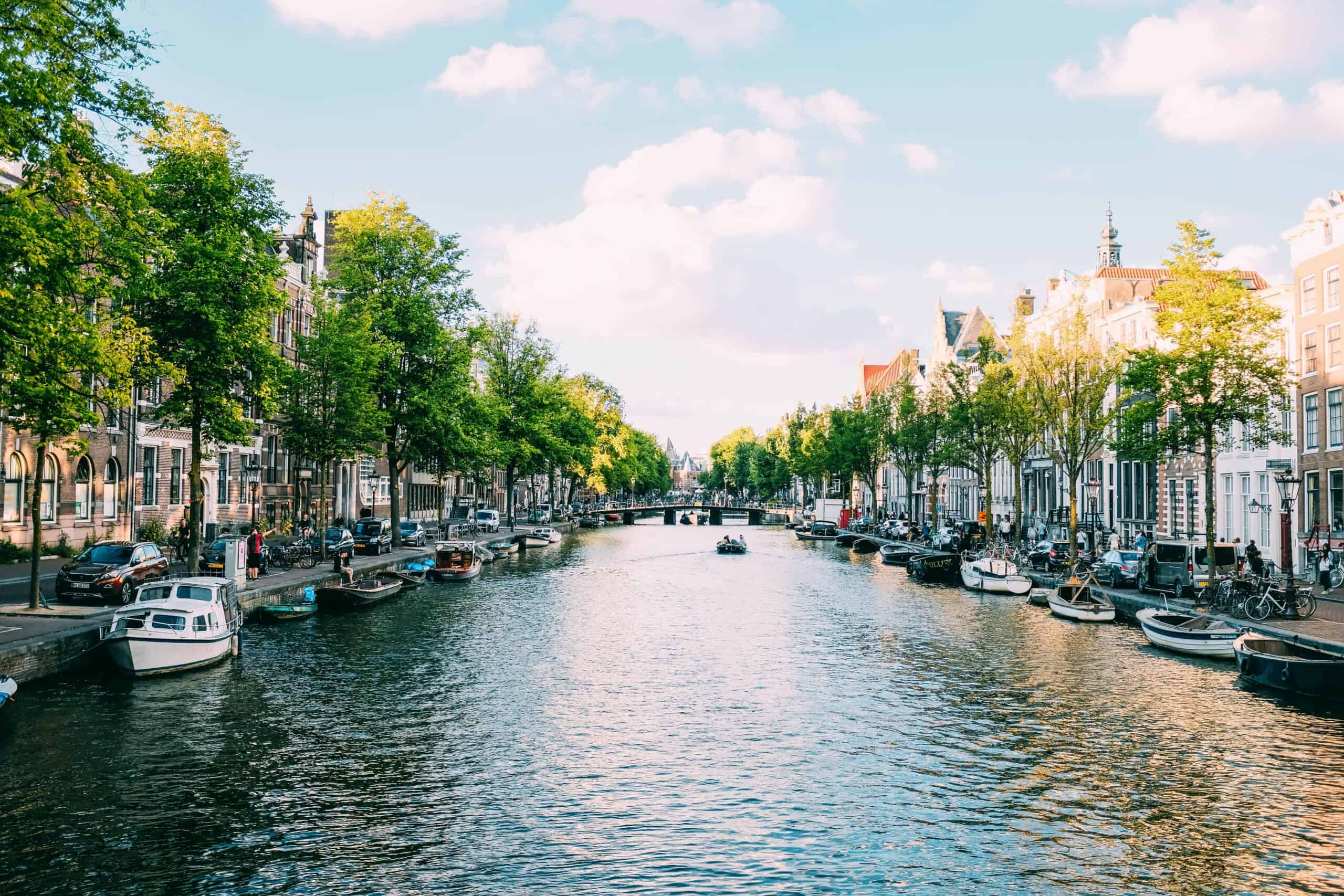 Amsterdam is the capital city of The Netherlands and one of the most popular weekend trips in Europe and top global travel destinations. Amsterdam has a lot to offer, with food, history, art, and culture appealing to many people.

13 of the Best Things to Do in Amsterdam

Here are some of the best things to do in Amsterdam at any time of year for a memorable experience. Whether it’s your first time in Amsterdam or you’ve been here multiple times, there is something on this list for you to discover. 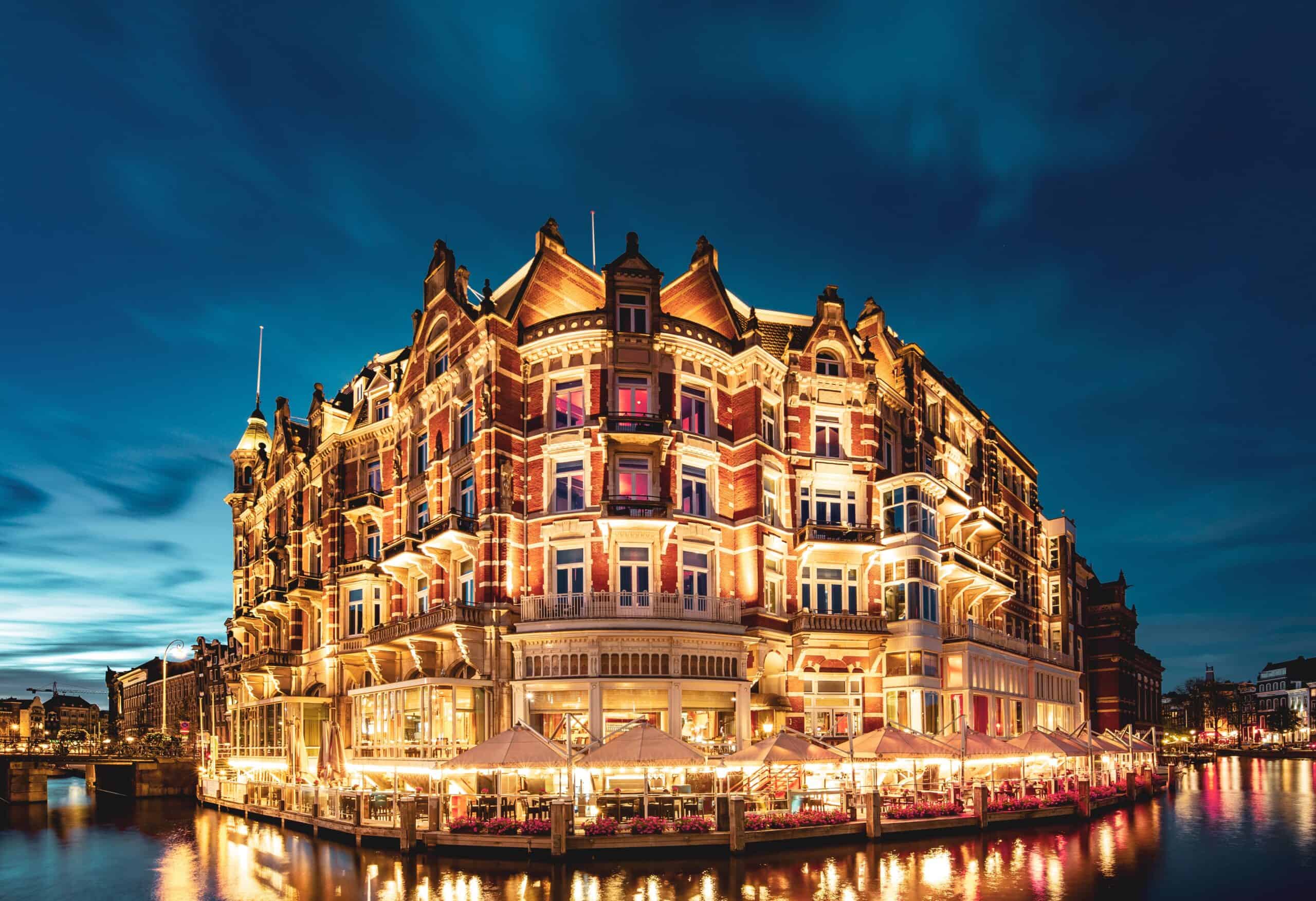 When you picture Amsterdam, I’m sure images of many canals and bridges backed by tall, narrow houses spring to mind. However, I can confirm that they are much better in person. You can spend hours strolling through all the canals (over 600 canals and 1700 bridges in the city), finding new places along the way, and passing other tourists and Amsterdam-ers on bikes.

Another beautiful way to see Amsterdam is to take a canal cruise and watch the city as you float on by. I recommend enjoying the canals both day and night because they are different scenes to observe but equally as satisfying. It also makes for fantastic pictures!

Note: Something to remember is that the Red Light District runs through the center of Amsterdam but will give you a warning in the form of Red lights at the start of the streets, so look out for this.

You may not think of Amsterdam as a foodie destination, but it actually holds culture, tradition, and Netherlands-style in its dishes. Read this Amsterdam food guide and food tour review to find the specialties, secrets, and Stroopwafels that must be one of the first things you do when in Amsterdam.

Once you are taken on an Amsterdam food tour that explains the traditions of cuisine in The Netherlands, the history of Amsterdam city, and feeds you the fantastic bites on offer, you will come to appreciate Amsterdam as a place for eating!

Anne Frank was a young Jewish girl who was forced to hide with her family for two years in the Annex of an Amsterdam house while The Netherlands was under Nazi occupation during World War II. During the two years, she wrote a diary that was left in the Annex after the Gestapo’s capture of the family. Sadly, Anne Frank died in a concentration camp, but her story lived on through her diary, which her father, the only survivor, published in 1947 as The Diary of a Young Girl, fulfilling his daughter’s wish to be a writer.

Today, you can go to the Anne Frank House in Amsterdam, which is now a museum, and visit the actual Annex where Anne Frank had to hide. Note: you can only buy tickets online and for a specific time slot.

4. Tulips of Amsterdam and Botanical Gardens 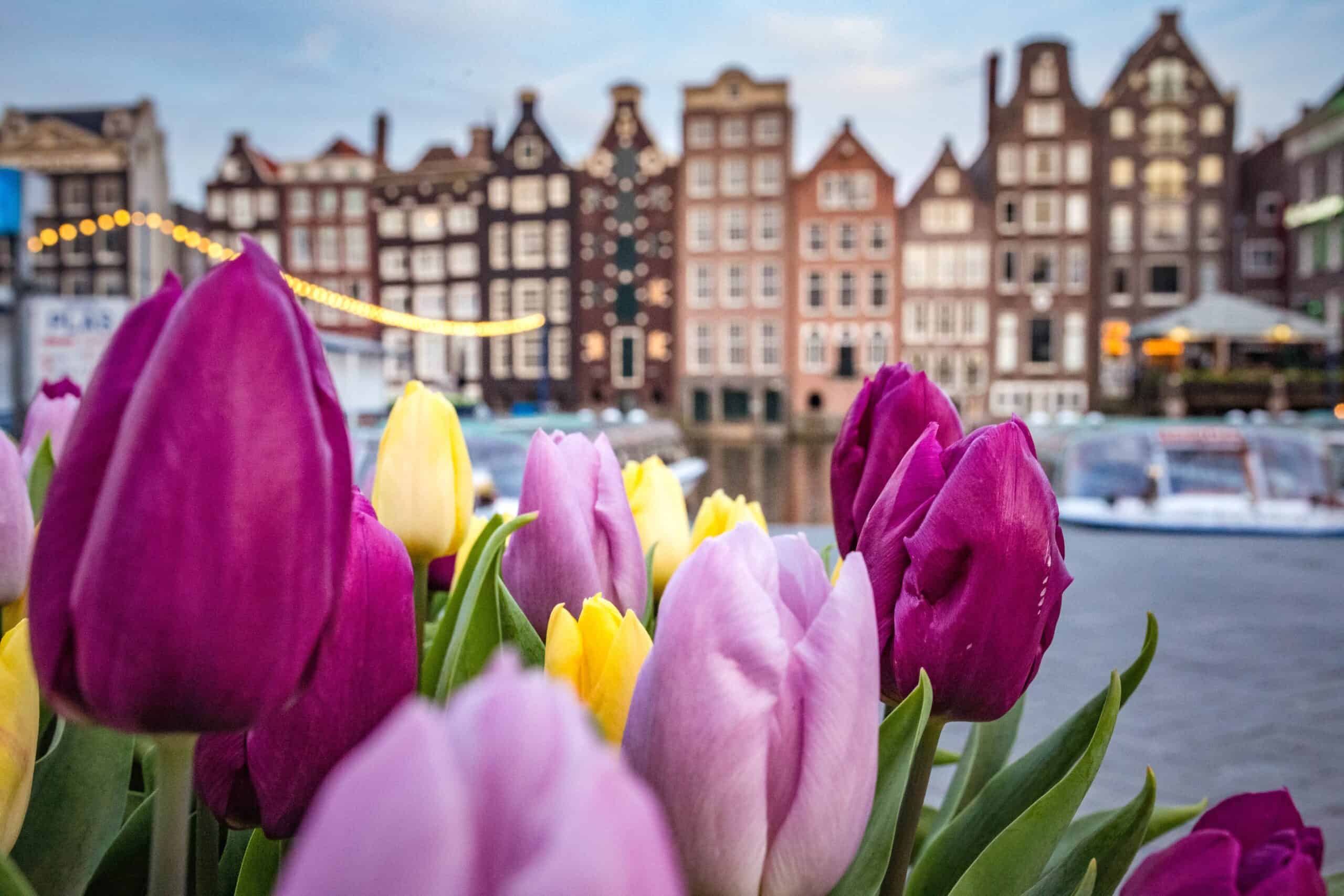 The Tulips of Amsterdam bloom because of the perfect conditions of the city. They are truly a pretty sight, and you can find them blooming in the parks, sprouting on the canal sides, and for sale at open markets. The best place to see Tulips is the Tulip Field, known as Keukenhof Tulip Gardens, about 40km from the center of Amsterdam.

A visit to the Botanical Gardens is also worth doing while on holiday in Amsterdam because here houses the finest flowers and plants of the city and you can get a great souvenir too. It’s one of the oldest botanical gardens in the world.

The famous artist Vincent Van Gogh was born in The Netherlands, and right in the center of Amsterdam, you can learn about the life and work of Van Gogh. The permanent gallery displays Van Gogh’s most famous masterpieces.

Another famous artist celebrated in Amsterdam is the painter Rembrandt Harmenszoon van Rijn. At the Rembrandt House Museum, you can visit a reconstruction of his home and workroom and peruse his best art.

Sip coffee at the many cafes that Amsterdam is known for and watch the world go by. Top recommendations for areas to browse include the De Pjip neighborhood (specifically at Albert Cuyp Market) and the Jordaan neighborhood. In Jordaan, head to Cafe Papeneiland, which is perfectly located on the corner of two canals and a nearby open-air market.

Most hot beverages you order come on a saucer with a little biscuit because the Dutch love their sweet treats. Look out for the shops selling licorice which is a national favorite!

The squares and piazzas of Europe are always great places to explore and good indicators for getting to other parts of the city.

Dam Square is an Amsterdam attraction you have to visit. In the center, there is a national monument with two lion statues to see, shopping, attractions like Madam Tussauds, and the Koninklijk Paleis (Royal Palace), which is at the West of the square overlooking the city. If you’re there when the Royal family is there, keep a lookout for them on the balcony.

Rembrandt Square is a fun area in Amsterdam with lots of places to enjoy food and drink, wander throughout the stalls, and go shopping. Fun note: There are ice rinks in the winter! 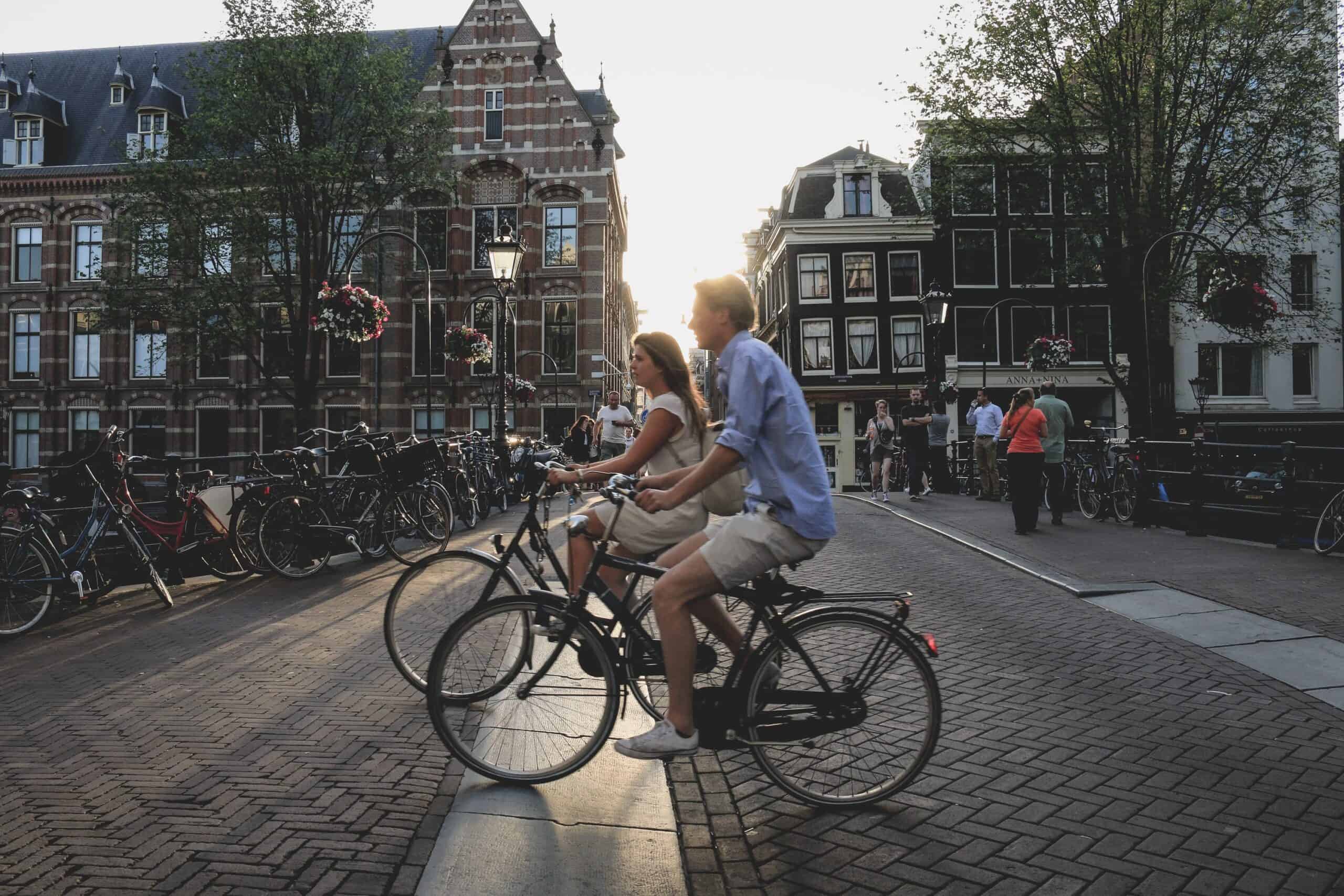 There isn’t a spot in Amsterdam where you won’t find a bike, biker, or bike parking. The city is synonymous with cycling. There are a few cars and trams throughout the town, but bikes are King and take preference over everyone (including pedestrians). Almost everyone I know who has visited Amsterdam has a story associated with nearly being hit by a bike. So as a pedestrian, be careful.

Rent a bike from anywhere around town (but ask your accommodation if they have any available first) and explore the beauty of Amsterdam from two wheels.

One of the best-known beers around the world is Heineken. It is a popular Dutch beer that the locals have a lot of pride in.

In Amsterdam, you can take part in the Heineken Experience, where you learn about its origins, the process of creating the beer, test the connoisseurs on their knowledge, and of course, taste two fresh pints from the very first Heineken brewery.

11. An Afternoon at Vondelpark

Vondelpark is a big urban park (120 acres) in the city of Amsterdam and is popular with tourists and locals alike. The park is a lovely break from the busy city where you can ride bikes, stroll, take a picnic, enjoy the lake, visit the statues, go to the open-air theatres, and browse the various stalls.

Keep an eye out for events in Vonedlpark throughout the year. On the 27th of April every year, King’s Day is the annual holiday in The Netherlands, and fun, orange festivals take place in Vondelpark.

12. Day Trip to the Countryside of Holland 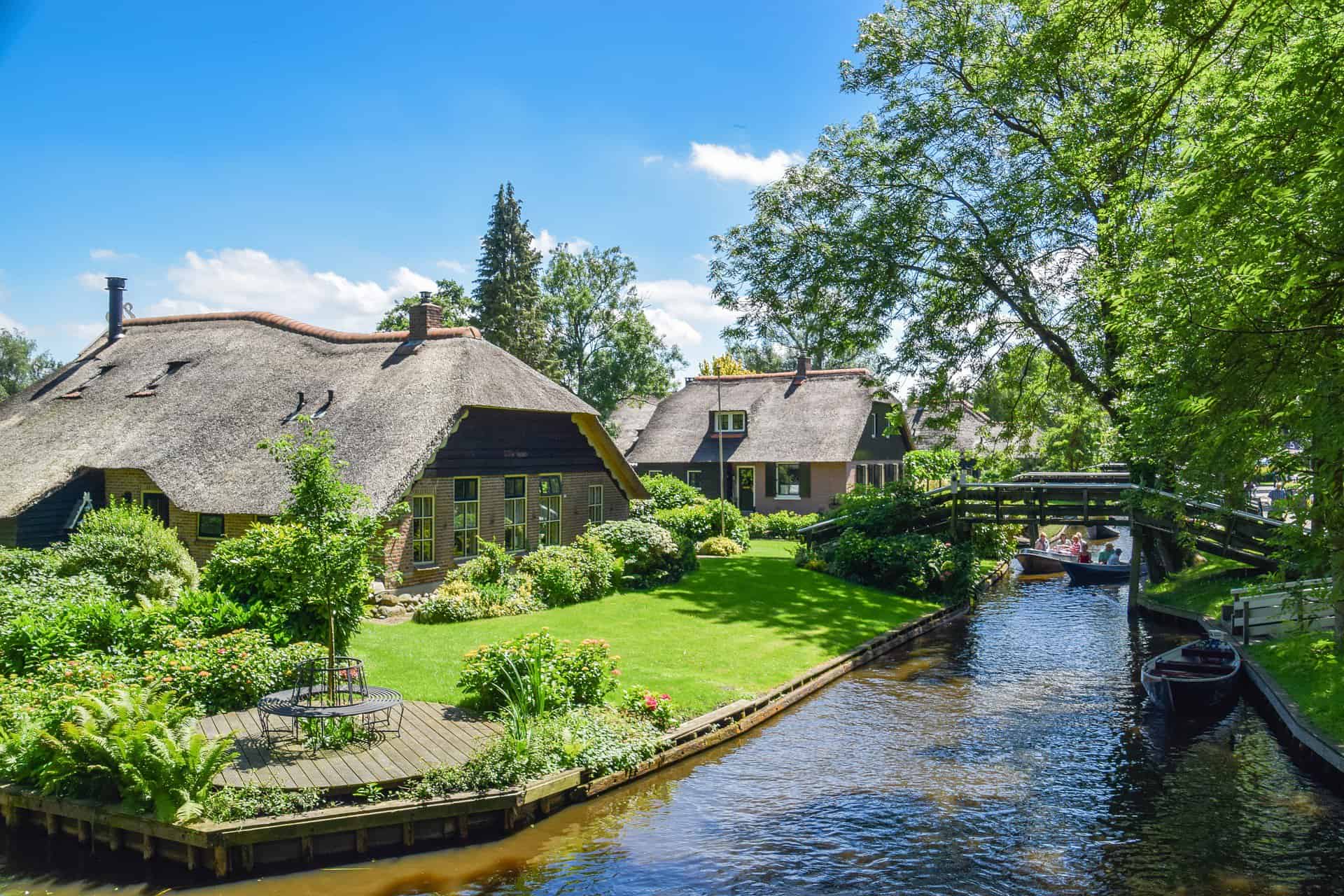 Amsterdam is an excellent hub for traveling to other parts of The Netherlands, and other parts of Europe too, by flight, bus, car, and train. But the day trips are some of the coolest ways to discover more of Holland.

If you want culture, countryside and the resting place of Willem of Orange, then you need a trip to Delft. If you want Windmills, go to Zaanse Schans. But, for lego-like, pretty, and colorful buildings, head to the town of Zaandam. If you want to see a real-life fairy-tale town, try Giethoorn.

End your time in Amsterdam in one of the local secret spots of Pllek. This area is fairly unknown to tourists but is on the rise as a new hotspot, and for good reason. It is made out of containers with benches, bars, and restaurants looking out to the water. They sometimes have live music, open fires, and street food stalls. It is the perfect spot for sunset in all of Amsterdam and something you shouldn’t miss.

To get to Pllek, you need to take the (free) ferry from Amsterdam Centraal Train Station to Noord, and you’ll stumble upon the containers for a lovely place to watch the sun go down.

I’m Shireen from The Happy Days Travels and my blog focuses on stories, food and literary travel. My favourite things to do while travelling are tasting local cuisines, meeting locals and reading books about the place.