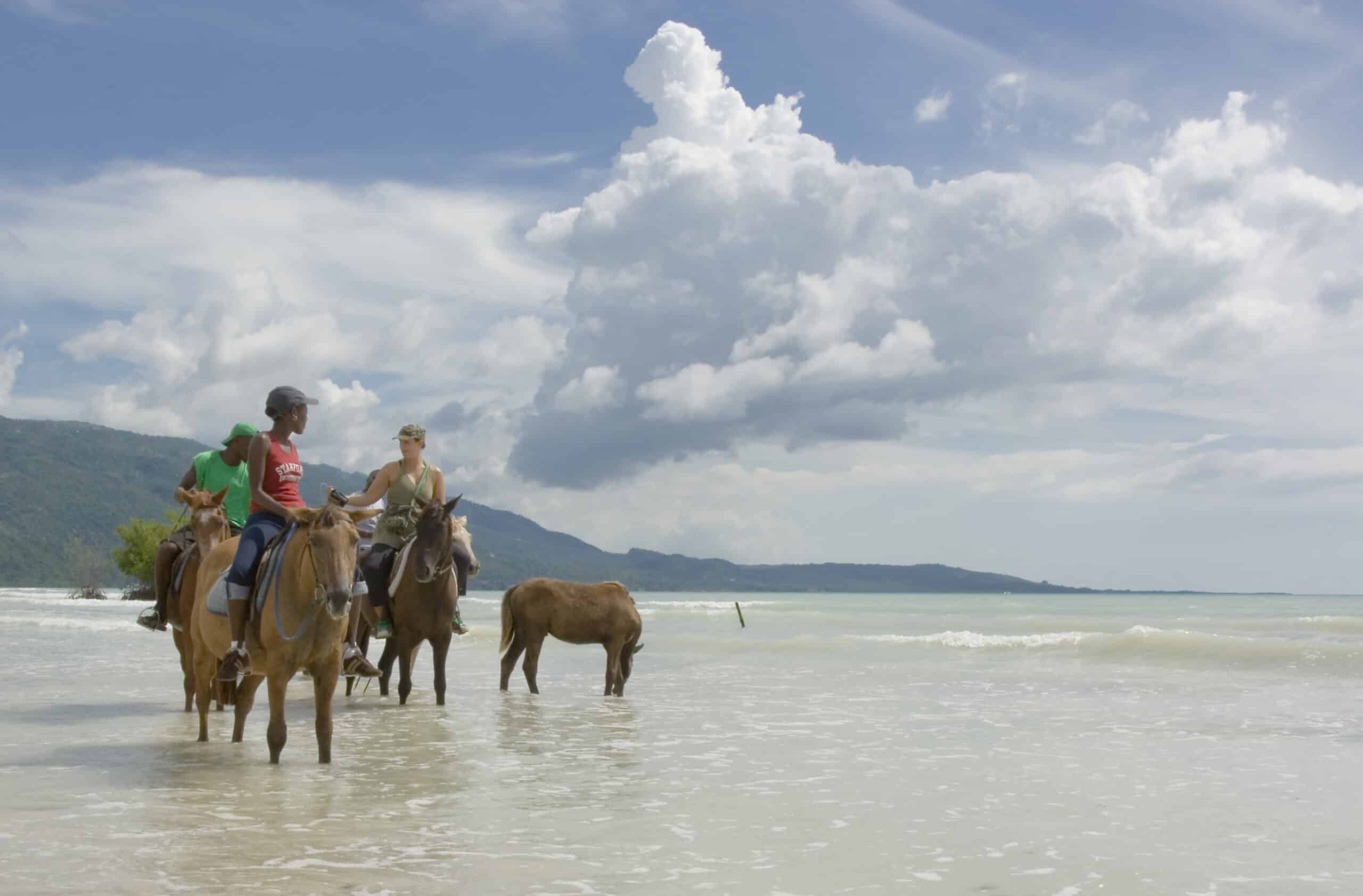 Montego Bay Jamaica, or “MoBay,” is a nice break from the hustle and bustle of the city’s downtown area. There are sun-kissed beaches, iconic plantations, tropical gardens, and a picturesque countryside dotted with rocky peaks. There are many things to do in Montego Bay that fit the bill for a tropical getaway.

Things to Do in Montego Bay Jamaica: Something for Everyone

You can go diving and snorkeling in the Montego Bay Marine Park and on the reefs that line the beaches with blonde sand. Fishing, golf, hiking to waterfalls, and bamboo rafting are also options to add to your list of things to do in Montego Bay. Are you going to Montego Bay Jamaica with older kids? Ziplining through the jungle is one of the most popular things with your family in Montego Bay.

First Things, First: Where to stay in Montego Bay Jamaica

Huge resorts and all-inclusive hotel chains are in charge of the best parts of the beach, and there are more guest suites here than in any other part of the country. Here are two of the most popular places to stay.

Hotel guests can easily visit some of the city’s most well-known attractions because they are only a short distance away from popular places like Harbour Street (2.0 mi) and the Blessed Sacrament Cathedral (2.1 mi), which are both near the hotel. Each room has a flat-screen TV, a minibar, and air conditioners. During your stay, use some of the things the hotel has to offer, like housekeeping and a concierge.

This is one of the best Sandals Resorts in the Caribbean. The Sandals Montego Bay is the only hotel in Jamaica with a private island with a Thai restaurant. There are beautiful,  Over-the-Water Butler Villas with Infinity Pools and Butler Honeymoon Bungalows over the water. There are also  21 top-notch 5 Star Global Gourmet restaurants to choose from, nine at Sandals Royal Caribbean and twelve at Sandals Montego Bay.   British-style afternoon tea is served every day. There is also a  British Pub where you can have an authentic pub experience in a chillaxing and charming setting.

Things to do in Montego Bay Jamaica

It’s among the most unforgettable trips in Jamaica –  Swimming with horses in the Caribbean Sea. For the first part of the tour, you’ll go on a 30-45-minute trail ride through farmland, jungle trails, and a beach for a picture. It’s then back to the corral via the seaside and a chest-high ride through shallow seas before visitors start changing horses and get on the ride of their life.

You can go on a tour to St. Anne and stop at Chukka Cove in Llandovery. It’s a 15-minute swim out to sea on the back of a horse. As a bonus, everyone has to wear a floatation device, and horses are great swimmers! Don’t be afraid. The horses love the cool water on their coats, and at least three guides ride horses out there with you.

Many people will recall the movie Cool Runnings, where John Candy narrates the tale of the first Jamaican Bobsled team that competed at the 1988 Calgary Olympic Games. They have since become famous around the world after being able to compete in the Pyeongchang Olympics with Red Stripe’s help.

It would be best if you went to Mystic Mountain to try bobsledding. It is one of the unique things to do in the Caribbean. Consider taking a chairlift to the top of the mountain. You’ll arrive at the Olympic museum, featuring Canadian favorite Donavon Baily, Jamaican superstar Usain Bolt, and the Jamaican bobsled team.

To go down Mystic Mountain in Jamaica and have a blast, you can either stay for a while or get on your bobsled right away and go down the mountain.

Bamboo rafting down the Martha Brae River is the best way to relax or a milder activity with younger children. As you glide through old plantations and jungle scenery, the scene is wonderful to look at.

They will take care of everything, so you don’t have to do anything. Make sure you have some money to enjoy a beer on the river. There are pubs, stores, and rope swings set up. The chances of getting wet are very low. If you want to be 100% confident that your cameras and wallets stay dry, you should use a dry bag.

You can book a trip to the Martha Brae River, which you can cancel up to 24 hours before the trip.

Many locations of Jamaica have zip lines and canopy tours, but then most Montego Bay trips go to Montpellier for this adventure. Five glides over the river and through woods are included in this two-hour excursion while you discover flora and fauna. So prepare to climb ladders and walk on ledges, but don’t worry; you’ll always be strapped in.

Take a lazy tour on a river tube after ziplining. The guides are a lot of fun to be around and have a variety of exciting tales to share. River tubing is similar to bamboo rafting, but you float off the rushing water on inner tubes tied together instead of rafting. This is not a whitewater rafting experience; it is a laid-back and enjoyable tour.

Set sail towards Negril, where you’ll take in the scenic beauty before diving into the reef for some snorkeling. You may begin the adventure by snorkeling. The Montego Bay Marine Park is a nature reserve where you may snorkel and learn about the local marine life. Don’t forget to bring your GoPro or action camera to capture unforgettable moments! If you are lucky enough, you might see barracuda, trumpetfish, and pufferfish.

You can go for a swim to Pirates Cave when you are done indulging and looking at the aquatic fauna. Like Green Grotto Caves, it was previously a pub but is now a popular swimming spot. It was formerly a hideout for pirates who wanted to keep their loot hidden.

Before returning, stop at Rick’s Cafe, one of the island’s most iconic bars, to watch the world-famous cliff divers. Tourists are welcome to leap from the cliffs, although there have been some injuries in the past. Perhaps,  it is better to leave it to the experts.

The tour begins with a trek up Braco Hill, where you will discover the island’s vegetation and fauna. The hike concludes with breathtaking vistas and cold towels to refresh you before descending the mountain on bikes. After passing through stables and fields, you’ll arrive at the beach for a brief dip to cool down after all that effort.

Dunn’s River Falls, near Ocho Rios, is one of the most famous Montego Bay daytime tours so expect crowds. However, be aware that the distance from the city is an hour and a half. Dunns River Falls is a 180-meter-high gushing waterfall popular tourist destination.

Another waterfall to see is YS Waterfalls. However, it is even further distant at 2-hours. Nevertheless, you will indeed have a great time in YS Waterfalls because in case you consider hiring a private guide, which is strongly recommended. You and your loved ones will get a lot more out of it if you hire a tour guide than if you decided to do it yourself.

The ATV Tour in Sandy Bay is a fantastic day trip from Montego Bay. It is highly suggested to take four-wheelers up a steep hill for stunning seaside views.

Chukka Tours provides ATV and Dune Buggy tours. You can always ride in a Dune Buggy as a passenger if you don’t feel at ease driving. The tour guides kept a steady and enjoyable pace, which you will surely appreciate. There was just the total combination of exhilaration with just the appropriate amount of safety.

One of the most remarkable Montego Bay sights is to visit the spectacular cave system where James Bond’s Live and Let Die was filmed. The Green Grotto Caves were not only famous for the movie, but they also played a considerable part in Jamaican history.

In the 17th century, the 1.5-kilometer-long underground system served as a hideaway for enslaved people and Spaniards. In the 1990s, Runaway Cave was also used as a nightclub, but it is now only open to tourists.

It’s a short trip that takes you into Runaway Cave and Green Grotto’s paved pathways. Then, prepare to descend 65 stairs to an underground lake that served as the setting for James Bond’s submarine scene. Also, keep an eye out for bats as there are ten million bats in the caves.

As you tour Rose Hall, the island’s most famous Great House, you’ll learn about the White Witch. Rose Hall was a historic plantation house run by the terrible Ann Palmer, who, during her tyrannical rule, murdered three of her husbands and innumerable enslaved people. Tourists can see her sealed grave on the grounds where her slave lover murdered her.

You can join a ghostly night tour to understand the place better since Ann Palmer is supposed to still wander the grounds after being cursed by enslaved people.

Slavery was, unfortunately, a big part of Jamaica’s history. However, it was also the epicenter of action and an insurrection that led to the abolition of slavery. Sam Sharpe was a Jamaican anti-slavery activist and hero. He was hanged for encouraging the insurrection, but Britain began exploring ways to abolish slavery one week after his execution.

Green-Wood Great House is a must-see in Jamaica, even if Rose Hall is the most renowned excellent house tour. It is among the few Great Houses to have survived the 1831 slave revolt.

Although enslavers, the Barrets, were beneficent and spared from the insurrection, their home is now one of Jamaica’s best-preserved historical sites. A guided tour will take you through rooms with old furniture and rare and valuable collections of antique instruments and books.

Greenwood has been managed by Bob and Ann Betton in the community since 1976, and they still live there now.

Scotties is a local favorite, and when you ask your tour guide if Jamaicans still eat there, you would probably get an emphatically yes! Chicken, pork, and fish are cooked over an open flame on a massive grill.

Scotchies are distinguished by their Scotch Bonnet Pepper Hot Sauce, which imparts a distinct Jamaican Jerk flavor to the cuisine. All seating is provided on picnic tables under the cover of trees and cabanas. Ting Soda or Coconut water are two delightful native drinks to try.

The Hip Strip, also referred to as Gloucester Avenue, is the spot for partygoers. It’s where all of Montego Bay’s hot bars are located. There are also several all-inclusive hotels in the neighborhood and a famous tourist beach with a $3 entrance fee. Stores line the street as tourists stroll in their flip-flops from shops, pubs, and nightclubs, attempting to take in the Jamaican Ambience.

Toasty Advice on Things to do in Montego Bay Jamaica

I am a digital marketer who one day discovered that I love blogging, SEO, and ways to make money online. Traveling and exploring cultures is another of my passions.